N****s will lose they mind for it. Wine for it, dine for it.
Spend time for it, see no colored line for it.

The power of the vagina is incredible. It’s a self-cleaning machine, it bleeds without injury and gets wet without water. Not to mention that tiny hole that we have is elastic! We push out babies from that tiny hole every day making a new generation.

The things that men will go through to get it is truly mind blowing and if it’s good, the things they’ll tolerate to keep getting it is proof that the vagina is like no other.

Months ago I saw a status made by one of my Facebook friends and it had me wondering “damn is this really true? This can’t be true.” 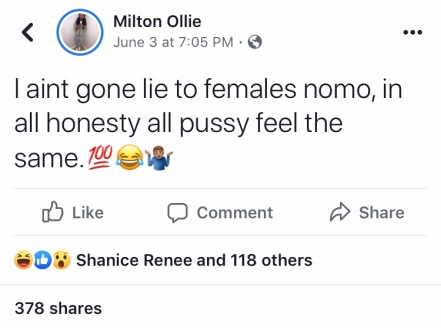 This is coming from a man so I was intrigued that he made this status. I’m a woman so I have no idea what the inside of another female feels like. Even if this was a joke.. some jokes hold truth. I over analyze everything so of course me being me, I read all 72 comments under this status just to see what other people thought about this.

Afterwards I made a poll about this on my Instagram and had my male followers engage on the topic. Out of seventy-five comments, seventy-three of the comments were men disagreeing with the status.

Khalif, 24, disagreed saying that some women can reach a different level of being turned on sexually.

‘Some females can control muscles better than others and some females just can reach a different level of being turned on which is why they can get wetter and do other things like squirt easier and more frequently.’

I’m glad y’all got some sense because I knew I wasn’t tweakin’, I still wanted to get perspective from other males.

Yes, as women we all have the same private parts and holes but they feel different and look different. Some clitiours are bigger or smaller than others, some females get wetter than others depending on how much water they drink or how turned on they are. It’s different things that you have to factor in especially when it comes to the vagina.

Metro says that vaginas may each be different in terms of texture and curves, it’s likely that those differences wouldn’t be picked up by penetration with the penis.

Web MD says that penis sensitivity starts to decline with age, lessening from age 25 and up. One person’s penis may be more sensitive than another man so those men will feel two completely different experiences. Just like some men penis don’t feel the same to women because of shapes and sizes this goes for women’s vagina as well.

Other things to factor in is if you actual have a connection with that person or not. If you’re having meaningless sex with different women then, of course to you they may all feel the same because you’re not fully engaged with them.

Warmth, lubricate, and grip varies and can change over time. However, think about how sex feels with the woman that you like or love versus sex with someone that you barely know.

If all vagina felt the same then why put so much effort to get it?!

In this video where ASAP Rocky talks about double standards concerning men and women, he says “it’s a man’s world but pussy makes the world go ’round.”

Men smell good for women. Men get nice things for themselves but they get those things to be noticed by a woman. A man may take you out because he like’s you but he wants the prize between your legs too. He may pay your bills to take care of you and because he loves you but baby he wants to keep getting that thang too! That’s just how it goes.

Tupac said it the best…

“Revenge is like the sweetest joy next to getting pussy.”